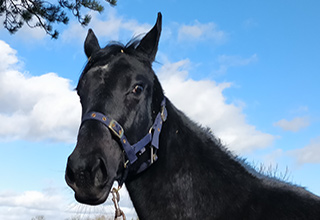 Only 1 share(s) equalling 0.3% is needed to qualify for prizemoney payments from Lily - 2YO for 2023's racing season.

Gender: Filly
Birth Year: 2021
Colour/Markings: This filly may look black on the videos and pictures, however, she already had strands of grey in her coat and will end up a proper grey, albeit a dark grey, by the time she reaches maturity. Currently, she has only one small marking - a white floret on her forehead.
Racing Post Form: View Race History
Racing Code: Flat
Expected to race in: North and Midlands

Land Force will see his first crop of youngsters racing in 2023, so this filly will be among his opening runners. He was a tough two-year-old, winning in Group 2 company over sprint distances. He was only allowed to race once at three before being retired to stud. He has the same No Nay Never line that Toronado, sire of Blitzle had.

Kept Under Wraps only ran twice. She was a winner over five furlongs in a Maiden and then ran in a Class 2. She has had two previous foals - both of whom are rated in the 70's. Blitzle won two races as a 2YO.

If you are looking for a deeper involvement with Lily - 2YO for 2023, check out our list of Private Service shares. We may have leases or outright shares available in this racehorse from 4% and above.

This is a rare chance to follow a very young horse from being a yearling, all the way through to her first season as a racehorse!

This great-looking yearling has a stable name of 'Lily' at the Ollie Pears yard (she hasn't been allocated a racing name yet). She was bred at the Bearstone Stud, just South of Malton, and was sent to the Tattersalls sales in February 2022, being sold as a yearling even though her birthday isn't until March.

The plan for this young horse is to spend the spring and summer in the fields around Ollie's yard, simply growing and maturing, and she will enter full training with the other yearlings when they arrive from the sales in September and October. She will be prepared through the winter and into spring and will be racing for the first time in April or May 2022.

We don't normally buy foals or yealings in February, however, there is a rather special reason for us to acquire this lovely filly so early. Ollie trained a horse called 'Blitzle' a year ago, who was a leading light in his yard until a sudden injury meant he had to retire. Blitzle won twice in his opening season and looked set for a high-profile racing career until it was cut short by a non-genetic injury. Lily is Blitzle's half-sister, and is by the first season sire Land Force. Land Force is by No Nay Never, the grand-sire of Blitzle, so there are solid pedigree lines that echo her half-brother's.

Ollie had kept an eye on this yearling and visited the stud on several occasions to check on this filly's progress. When she came up for sale he was keen for her not to go anywhere else but to his yard in Malton and we were delighted to act on this information and buy Lily at the sales. She's already got the stamp of a decent horse, is full of life, and if she is anything like her half-brother will be a sharp sprinter and have the ability to win races.

Despite being almost completely black at present, she will slowly turn grey as the months go by. And we are expecting to bring all the changes in this young horse to shareholders right through 2022 and into her racing season of 2023. We will cover all the up's and downs, as well as her training and breaking in the autumn. Lily will be a slightly different proposition for her shareholders - in effect, a twenty-month involvement in her until the end of her first season of racing in November 2023.

Ollie told us, "I've been after this young filly for over a year. I had hoped to buy her direct from the stud, but she was sent to the foal sales instead. However, I'm delighted Ownaracehorse stepped in and have got involved. She wasn't a cheap horse, but then I think she has both the pedigree and looks.

Ollie went on to say "We're looking forward to having a young horse around the yard, and you never know, if she works out we might try having another one or two younger horses around the place in future. It's a bit of an experiment, but hopefully, your shareholders will enjoy following her journey to being a racehorse."

This filly's breeding backs up Ollie's view. Bred along similar lines to Blitzle, with a fantastic pedigree on the dam side. Lily's mother won twice and she was a sister of Group Three winner Salford Secret. The second dam's offspring reads like a who's who of top-grade racehorses: Dylan Thomas, Homecoming Queen, and Queen's Logic all achieving super-star status.

"If you have trouble selling this filly there is something wrong!" stated Ollie Pears, "She has a top-quality pedigree. The only question mark against her is her sire Land Force - who will be a first season sire in 2023, but even he was a fantastic sprinter and some of his foals brought good prices. But even if the pedigree doesn't impress potential shareholders, her looks should do the rest. She's a really good-looking sort."

This filly is currently at Ollie Pears' yard in Malton and will be given time to mature over the spring and summer before being broken in October or November and then enter full training straight afterwards. After trotting and cantering in December, he will have a short rest before building up to race in the first few months of the 2023 season.

We will be reporting on this filly's progress for shareholders on an ad-hoc basis through 2022, updating them on the major breakthroughs with her training - and we will provide regular updates on her progress on the gallops and with her education from March 2022 onward. She will be available to view at our spring and autumn yard visits to Ollie's yard.

This is truly a one-off opportunity to be involved in a racehorse right from the start of her journey to the racecourse.

The race plans for this filly will be determined by her level of ability shown at home and on the course in 2023.  On breeding she should start at five or six furlongs and then will perhaps get further as she develops physically and mentally over the next eighteen months.

The standard route of a horse of this type will be to start in Maiden (races for horses who have yet to win a race) or Novice/Auction or Selling/Claiming races (2YO only races where previous winners get extra weight) and his performance in these first three of four races will determine whether he goes into nursery handicaps, or is good enough to tackle conditions races or even step into pattern races (high value, prestige races).

Until late in 2022 this filly will be completely untried, so it will be the spring of 2023 before we know anything about her ability.  We will assess this filly's progress and if Ollie believes he has the right level of ability she may get entries for some of the more prestigious races in the racing calendar.

Your online Racehorse Manager will provide full details of all developments in terms of the filly's progress and race planning the months roll by.

We expect to get 2-5 runs and sometimes more from all our 2YO horses per share period, however, you should expect periods of no racing as a result of recuperation from injury or training setbacks. This share period starts proper at the start of the turf season on April 1st 2023 and runs through the turf season until November 1st 2023, however, we will be reporting on the filly before the share period starts (from March 2022) should we have anything of importance to share with shareholders.

During the season the horse may be rested or have time away from the track to recover and it is quite normal for a flat horse to have periods of 3-6 weeks rest between races. 2YO's are particularly susceptible to sore shins, bone chips and growing pains, and can need a greater time to recover between races.>/p>

We provide guarantees with all our racehorses: If this filly has a season-ending injury and has not already raced twice during the share period, we will replace her with an alternative horse for the remainder of the season. Replacement horses may not be of the same quality, are provided with no further guarantees and no alternative choice can be provided. Prizemoney cannot be paid on any replacements, but all other benefits such as yard visits and race day badges are available.

2YO's are the most risky of racehorses to own - and you should be aware that there is a chance that your 2YO may not race at all. Around 20% of 2YO's will not reach the racecourse during their 2YO season simply because they are not ready either physically or mentally.

As a shareholder you must understand that we cannot guarantee your horse's performance, a specific volume of runs (beyond our minimum guarantee if injured) or that runs will be evenly spaced throughout the share period. This is the chance you take when owning any racehorse and participating in this ownership experience. If you will be disappointed with only 2-3 runs from your racehorse during the season, then please DO NOT PARTICIPATE IN THIS OR ANY OTHER RACEHORSE, as you could be disappointed. We believe in being crystal clear with our shareholders - any participation in racehorse ownership is a risk, and we are unable to make any refunds because of share periods which finish early due to injury or retirement - as training and livery fees for the horse still remain whether they are racing or not and part of your lease payment covers their build-up to the season.

These risks are the chance all shareholders take, as we do ourselves when participating in the ownership of racehorses.