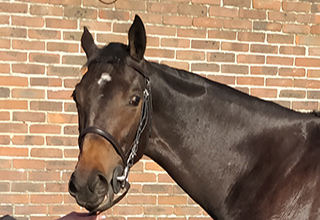 Only 1 share(s) equalling 0.25% is needed to qualify for prizemoney payments from Intello Filly 2022's racing season.

Gender: Filly
Birth Year: 2020
Colour/Markings: This filly is dark bay in colour. She has no distinguishing features on her body, but sports a sharp white cresent on her forehead.
Racing Post Form: View Race History
Racing Code: Flat
Expected to race in: South and Midlands

Intello was unbeaten as a 2YO and developed into a Group 1 performer as a 3YO, winning the G1 Prix du Jockey Club and eventually running third in the Arc to Treve. He stands for GBP 12,500 and has sired a large number of Group winners in the last five years.

Silkenveil has had five of her offspring to race and every single one of them has recorded one or multiple wins. Several have won as two-year-olds. She tends to get horses that also do well as three-year-olds and older, although Big Bear Hug (which we also own) has shown plenty as a 2YO. 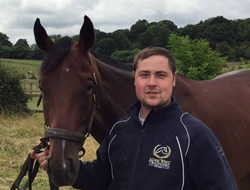 If you are looking for a deeper involvement with Intello Filly 2022, check out our list of Private Service shares. We may have leases or outright shares available in this racehorse from 4% and above.

We were shocked when this lovely sister of Big Bear Hug was knocked down for less than ten thousand pounds at the Tattersalls Book 3 Sale. Fortunately for us, this filly went through the ring before her half-sister, Big Bear Hug showed her class when running a huge race in a 2YO Maiden at Yarmouth. That race was contested by a ton of expensive, well-thought-of youngsters and advertised the mare, Silkenveil, as being capable of producing classy offspring.

Trainer Adam West was over the moon to have secured her for us and said of the filly, 'She is so much like Big Bear Hug! She walks the same as her half-sister and has that air of class about her. We were lucky that she went through the Book 3 sale towards the end of the day, as it meant there were less people around. I also believe had she gone through after Big Bear hug ran at Yarmouth on October 19th, this filly could have been three or four times more expensive!'

Adam added, 'She moves just like Big Bear Hug and just as her half-sister did, she possesses plenty of scope. She has already settled nicely into life at Lorretta Lodge and we can't wait to see what we've got as we break her in over the coming weeks.'

Ownaracehorse shareholders have already enjoyed success with similar fillies in Adam's yard in the last few seasons. Daphne May was Adam's recommended two seasons ago and managed to win twice for her shareholders and finish on a rating of 78. Big Bear Hug is expected to lose her maiden tag very soon and we anticipate she will be rated 80+ based on her Yarmouth run.

Adam West told us 'This filly is currently a little bit leggy, but her sister was too - and she's turned out alright! Having another winter under her belt she will strengthen up and could turn out to be another significant filly . She exhibits plenty of quality, and has the physique to go with it.

"This filly's breeding suggests we will be able to get her racing once the six furlong juvenile races start in the 2022 season. She is a tall, athletic individual, and she could well race right up until the end of the year as she will improve as she matures."

This Intello filly will be available to view at our Spring yard visits by her shareholders, prior to going racing in 2022. She is currently un-named, but will get her racing name quite soon.

Intello was top class, winning several times in Group company, including a Group 1 success in France and being placed in the Arc. His record with Indian Ridge mares is that he's only had one covering - which produced a 75 rated winner.

This youngster's pedigree is littered with half-brother and sisters who have been successful at the races. None of her five siblings have failed to win races at either two or three years old. Adam has indicated that she is the type to improve as she matures, and this is borne out by her family, most of whom went on to have successful three-year-old careers. If you are a shareholder looking for MORE than a single season involved with your racehorse, this filly would appear to be a good choice. (Shareholders in 2YO's are offered renewals for their 3YO campaigns before we offer shares to the public.)

"She's the sort to be starting at a minimum of six furlongs, but I expect she will come into her own over seven, and perhaps a mile as the 2022 season progresses," commented her trainer, Adam West.

This filly's family have a very decent record over a distance of six and seven furlongs, with multiple wins and horses achieving ratings in the 80's. Intello was a Group winning miler, which adds to the expectation that this filly will be winning her races over seven and a mile as a two-year-old. With the seven furlong and mile races not starting until June, potential shareholders should be aware that this filly's season is highly likely to start in mid-summer and go through into the autumn.

We are hoping this filly will see a racetrack for the first time in late May, or June 2021. However, potential shareholders should be aware that you can never legislate for how a horse may grow, develop, or indeed have setbacks. Adam tends to bring his 2YO's along in their own time, but isn't afraid of racing them against top-class animals. So shareholders may possibly see a couple of runs before the true potential of this youngster is realised.

As this filly will need at least six or seven furlongs to be at her best, Adam has indicated that she may wait for the longer distance races that start to become available to 2YO's in June and July (in 2020 Daphne May made her debut in July but went on to run five times. Big Bear Hug is expected to race 3-4 times in 2021). If this happens it could mean this filly may run right through into the All-Weather season in November and December. If this is the case, Ownaracehorse will automatically extend her share period to cover the extra few months up to the end of 2022.

The race plans for this filly will be determined by the level of ability shown at home and on the course in 2022.Â  On breeding she shouldÂ start atÂ six furlongs and then will get further as she develops physically and mentally during the year.

The standard route of a horse of this type will be to start in Maiden (races for horses who have yet to win a race) orÂ Â Novice/Auction or Selling/Claiming races (2YO only races where previous winners get extra weight) and her performance in these first three of four races will determine whether she goes into nursery handicaps, or is good enough to tackle conditions racesÂ or even step into pattern races (high value, prestige races).

If she shows the need for longer distances at home, she may have to wait for the seven furlong races that start in late May and June.Â  However, we will assessÂ this filly'sÂ progress and if Adam believes she has the right level of ability sheÂ mayÂ get entries for some of the more prestigious races in the racing calendar.

We expect to get 2-5 runs and sometimes more from all our 2YO horses per share period/season, however, you should expect periods of no racing as a result of recuperation from injury or training setbacks. This share period starts proper at the start of the turf season on April 1st 2022 and runs through the turf season until November 1st 2022, however, we will be reporting on the horse before the share period starts (from January 2022) should we have anything of importance to share with shareholders.

We provide guarantees with all our racehorses. If this horse has a season-ending injury and has not alreadyÂ raced twiceÂ during the share period, we will replace her with an alternative horse for the remainder of the season. Replacement horses may not be of the same quality, are provided with no further guarantees, and no alternative choice can be provided. Prizemoney cannot be paid on any replacements, but all other benefits such as yard visits and race day badges are available.

As a shareholder you mustÂ understand that we cannot guarantee your horse's performance, a specific volume of runs (beyond our minimum guarantee), or that runs willÂ be evenly spaced throughout the share period. Â This is the chance you take when owningÂ any racehorse and participating in this ownership experience. Â If you will be disappointed with only 2-3 runs from your racehorse during the season, then please DO NOT PARTICIPATE IN THIS OR ANY OTHER RACEHORSE, as you could be disappointed. Â We believe in being crystal clear with our shareholders - any participation in racehorse ownership is a risk, andÂ we areÂ unable to make any refundsÂ because of share periods which finish early due to injury or retirement - as training, vets, and livery fees for the horse still remain whether they are racing or not. Also, part of your lease payment covers the five months of their pre-season training.