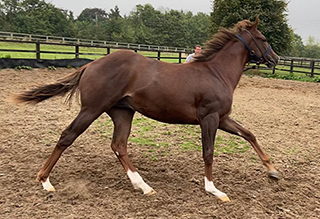 Gender: Colt
Birth Year: 2020
Colour/Markings: This colt is very similar to Roariung Rory, a dazzling light bay and a little bit showy. He has large white blaze down his forehead. Both his brothers have one white sock - however, this chap has three! He has the same, broad chest that his brothers exhibit.
Racing Post Form: View Race History
Racing Code: Flat
Expected to race in: North and Midlands

This colt has a family history we know plenty about at Ownaracehorse, as this is the third of the offspring from this mare we have raced. This colt is a half brother to Roaring Rory (won six times) and Ready Freddie Go (won five times so far). We love this mare as she seems to impart a real zeal for racing and will to win.

Unfortunately was a highly successful 2YO and 3YO and this colt is among the first of his offspring to race. He was aÂ multiple Group winning sprinter and top juvenile in France as a 2YO.Â  He has yet to prove himself to be a decent sire but as a son of Society Rock, we believe he will prove to be a very decent sire.

Barbieri was a winner of a decent Maiden, and was rated 90 at the end of her two-year-old season.Â  She was retired to stud after her 3YO career and we have bought two of her offspring, both of whom won multiple races for our shareholders. Every one of her last five foals have proved robust and won multiple times.

If you are looking for a deeper involvement with Lets Go Hugo 2022, check out our list of Private Service shares. We may have leases or outright shares available in this racehorse from 4% and above.

This colt stood out from the September sales catalogue, as he is a half brother to two horses we know an awful lot about, Roaring Rory and Ready Freddie Go. 'Rory' is now a sports horse, but won six times for his shareholders over sprint distances. Ready Freddie Go has won five times and is still only a 3YO. When Ollie Pears saw how this half brother (same mother, different father) was taller and just as athletic as both the others, he was keen to secure him for us.

We have had season after season of racing fun with Roaring Rory and Ready Freddie Go and this brother has the same look and temperament about him. He is a March foal so we are hoping he will be like his brothers and be an early sort who can go racing in April or May. Both brothers were ready to race in first few months of their two-year-old seasons.

Ollie Pears stated 'I was really over the moon to bring this chap back with me from Tattersalls. Roaring Rory was a bit of a hero in the yard and Freddie is going the same way, and I think this chap has the same feel about him.'

He added, 'He is already showing the same lively attitude and certainly has plenty of character. He's always on his toes and if anything, I'd say he had more scope than Rory and Freddie showed at this point.'

Ollie went on to note, 'The mare, Barbieri does so well with sires like Unfortunately. She'd been to a number of first season sires and always managed to produce winners. Ready Freddie Go is now rated 89 and is contesting valuable Class 3 events and it will be fascinating to see how this new lad fares. I know an awful lot about the family and hopefully, this lad will follow in Rory and Freddie's footsteps.

Being by a sire with proven sprinting abilities and out of a sprint winning mare at two, this colt has the right background to be a winner. Scuzeme, another of his half brothers, has now won three times (rated 70) and Hamper has won twice over in France, both as a 2YO and 3YO. The family is bursting with winners and all of them take their racing well and run plenty of times.

Ollie says of the colt "He's a good looking, hard-working colt, and like his brother he is a real delight to have around the yard. Just like Rory (Roaring Rory), he isn't massive but he's strong and even now seems to be forward going. He comes from a family of winners, and I would be astonished if he wasn't capable of landing a race for us."

Rather than referring to the colt as 'Rory and Freddie's Brother', the yard was keen to give him his own stable name as soon as he arrived and so Chelsea, his stable lass, called him 'Hugo'. 'He looks like a Hugo!' she explained. Chelsea suggested the name 'Let's Go Hugo' as it fits with his brother 'Ready Freddie Go' - and Chelsea also chose the name Freddie - so we're delighted to keep the tradition going!

Ollie went on to say 'Roaring Rory was really competitive throughout his racing career, running in handicaps. But the really important thing about him was that he is a real trier. Freddie is just the same. - Neither of them really set the gallops alight but put them on a racecourse and they become determined little fighters. The mare seems to breed this into her offspring and I'm sure Hugo will be the same if the early indications about his character are anything to go by.'

Hugo is bred to be a sprinter, as all his mother and father's families have been five and six furlong types. We would expect him to start his career locally, but he will race at tracks such as Redcar, Beverley, Thirsk, Catterick, Pontefract, Carlisle, and Newcastle.

Hugo is currently at Ollie Pears' yard in Malton and will be broken in before November and then enter full training straight afterwards. Â After trotting and cantering in December, he will have a short rest before getting ready to race in the opening stages of the 2022 season.

We are already reporting onÂ the colt'sÂ progress for shareholders on an ad-hoc basis, reporting on the major breakthroughs with his training - and we will provide regular updates on his progress on the gallops and with his education in detail from January onward. During the heart of the season we publish update reports every 7-10 days, and more regularly when he actively starts racing. Both his brothers were gelded before the season got going - and shareholders shouldn't be surprised if he starts his career as a gelding. Ollie sees no point in doing this mid-season and missing a few weeks racing time.

IfÂ everything goes to plan, and Hugo is far enough forward both mentally and physically, he will start racing in April/May and then get plenty more gallop experience up the 'Wold Gallop' at Malton and will be race right through spring and summer 2022. Â We expect between 3 and 7 runs from this colt during the season.

We bought this colt because we know the family really well. However, he's also a good size and walks well. All being well, he should provide shareholders with plenty of fun through 2022. Both his brothers won as 2YO's and we'll be looking for the same from Hugo.

The race plans for this colt will be determined by his level of ability shown at home and on the course in 2022.Â  On breeding, he shouldÂ start atÂ five or six furlongs and then will perhaps get further as he develops physically and mentally during the year.< p/>

The standard route of a horse of this type will be to start in Maiden (races for horses who have yet to win a race) orÂ Â Novice/Auction or Selling/Claiming races (2YO only races where previous winners get extra weight) and his performance in these first three of four races will determine whether he goes into nursery handicaps, or is good enough to tackle conditions racesÂ or even step into pattern races (high value, prestige races).

If, as we believe, he shows that he will be a 5f to 6f horse, then there are plenty of races available for him from May onward.Â  We will assessÂ this colt'sÂ progress and if Ollie believes he has the right level of ability heÂ mayÂ get entries for some of the more prestigious races in the racing calendar.

Your online Racehorse Manager will provide full details of all developments in terms of the colt's progress and race planning as the season progresses.

We expectÂ to get 2-5 runs and sometimesÂ moreÂ from allÂ our 2YO horses per share period, however, you should expect periods of no racing as a result of recuperation from injury or training setbacks.Â Â This share period starts proper at the start of the turf season on April 1st 2022 and runs through the turf seasonÂ untilÂ November 1st 2022, however we will be reporting on the filly before the share period starts (from January 2022) should we have anything of importance to share with shareholders.

During the seasonÂ the horse may be rested or have time away from the track to recover and it is quite normal for aÂ flat horseÂ to have periods ofÂ 3-6 weeks rest between races. 2YO's are particularly susceptible to sore shins, bone chipsÂ andÂ growing pains, and can need a greater time to recover between races.Â

As a shareholder you mustÂ understand that we cannot guarantee your horses performance, a specific volume of runs (beyond our minimum guarantee) or that runs willÂ be evenly spaced throughout the share period. Â This is the chance you take when owningÂ any racehorse and participating in this ownership experience. Â If you will be disappointed with only 2-3 runs from your racehorse during the season, then please DO NOT PARTICIPATE IN THIS OR ANY OTHER RACEHORSE, as you could be disappointed. Â We believe in being crystal clear with our shareholders - any participation in racehorse ownership is a risk, andÂ we areÂ unable to make any refundsÂ because of share periods which finish early due to injury or retirement - as training and livery fees for the horse still remain whether they are racing or not and part of your lease payment covers the build-up to the season.Â This risk is the chance all shareholders take, as we do ourselves, when participating in the ownership of a racehorse.