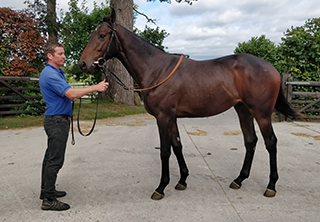 Only 1 share(s) equalling 0.25% is needed to qualify for prizemoney payments from Hidden Code 2022's racing season.

Gender: Colt
Birth Year: 2020
Colour/Markings: This colt is a dark bay, similar to his grandfather, Kodiac. He has the smallest of white flecks on his forehead and apart from that, he has no other major distinguishing features apart from his impressive size.
Racing Post Form: View Race History
Racing Code: Flat
Expected to race in: North and Midlands

This colt has a pedigree heavily biased on the side of sprinting. Kessaar only raced as a two-year-old but was aÂ multiple Group winning and placed sprinter.Â  He is a first season sire, with his first 2YO's racing in 2022.

Khibrah was owned by Hamdam Al Maktoum and is beautifully bred, being by Dark Angel and from the Lake Coniston line. She ran a few times at two over six and seven furlongs, achieving a rating of 67 before being retired to stud. She is related to a number of listed winners and this 2YO is her first offspring to race.

If you are looking for a deeper involvement with Hidden Code 2022, check out our list of Private Service shares. We may have leases or outright shares available in this racehorse from 4% and above.

Our syndicates have enjoyed plenty of success with Ollie Pears over the last few years, especially with our two-year-olds. Working with a limited budget Ollie had managed to furnish our shareholders with horses that are robust, competitive, and capable of winning races. As such, we've been very successful in sourcing first-season sires that punch above their weight. This impressive yearling is by first-season sire Kessaar, who is already being touted as a significant sire. He was bought from the main sale at Tattersalls and was a great early buy, as Kessaar half brothers went on to go for between 25k and 50k later in the same sale.

Ollie told us 'Most of the Kessaars seem to be being bought by the pinhookers looking to resell them at the breeze-ups - which is a very good sign, as they must believe Kessaar will be in demand next season. This lad impressed me at the Tattersalls September sales with the way he dealt with everything that day, and he took the traveling to Malton in his stride as well. He is well put together and I'd describe him as a rangy, powerful type. He seems to want to get on with things and so far hasn't put a foot wrong.'

Hidden Code is so named because of his pedigree: Dark (Hidden) Angel and Kodiac (Code).

Ollie went on to say "Hidden Code has Kodiac and Dark Angel as grandparents, both of whom were top-class sprinters and the dam was a 67 rated six and seven furlong horse for Richard Hannon. Put the two together and it looks like we have a five to seven furlong horse, However, because of this horse's stature, I won't be surprised if he needs to start at six and then go up in trip as he matures."

Ollie Pears stated, 'This colt has a lot going for him and it will be fascinating to see how he develops over the winter. He has plenty of scope, being tall and well made. I think he'll make a proper summer horse for 2022.'

The stand-out element of this colt is his impressive stature. Hidden Code is going to be an impressive sort when fully grown. Ollie was very excited when he brought this chap back from the sales as the colt has plenty of quality.

Ollie remarked, 'We like this colt a lot. He is well boned, has a good walk, and is well put together. Because of his size, he's unlikely to be a very sharp, early spring sort, but come the summer he will have filled out his frame and we should have a very nice type to go to war with.'

Ollie has stressed that although he believes Hidden Code will want sprint distances, we should not expect to see him very early in the season. He is a March yearling, and is already heading towards sixteen hands high, so he may need the first month or two of the season to be mature enough for racing. However, Ollie did say he thought June would be a likely starting point for him.

'You really don;t know what you're going to get with first season sires, but the dam has a good page and Kessaar has been in demand at the sales. Hopefully we'll have another one like the Sahkees Secret, Mehmas, or Cotai Glory youngsters I've managed to buy in their first years,' Ollie Pears - trainer.

Ollie added, 'He has settled into the yard nicely. He'll be broken in the next fortnight and we'll have him ridden away before Christmas. We'll know what we've got in February or March. He's actually got far more going for him than most at this stage, and that can only be positive."

Ollie went on to state 'He is a good-looking bay and well proportioned. I'd expect him to lengthen out and I'd love to take him to York for the Rous Stakes in June if everything works out for him.'

Hidden Code is currently at Ollie Pears' yard in Malton and will be broken in before November and then enter full training straight afterwards. After trotting and cantering in December, he will have a short rest over Christmas and New Year before getting ready to race in the May or June of the 2022 season.

We are already reporting on this colt's progress for shareholders on an ad-hoc basis, updating them on the major breakthroughs with his training - and we will provide regular updates on his progress on the gallops and with his education in detail from January onward. During the heart of the season we publish update reports every 7-10 days, and more regularly when he actively starts racing.

If everything goes to plan, and this colt is far enough forward both mentally and physically, he will start racing in May or June - although this could slip to June or July if he grows considerably through the winter. He will get plenty more gallop experience up the 'Wold Gallop' at Malton and will be race right through summer 2021. We expect between 2 and 6 runs from this colt this season, and he will most likely race around the Yorkshire, Lancashire and North Eastern racetracks.

Please be aware that there is a possibility that we may decide to geld this colt once we are convinced he will not be absolutely top class (the only way he could become a sire). Geldings tend to benefit from having more paddock time, and also become easier to handle in and around the stables.

The race plans for Hidden Code will be determined by his level of ability shown at home and on the course in 2022.Â  On breeding he shouldÂ start atÂ five or six furlongs and then will perhaps get further as he develops physically and mentally during the year.

The standard route of a horse of this type will be to start in Maiden (races for horses who have yet to win a race) orÂ Â Novice/Auction or Selling/Claiming races (2YO only races where previous winners get extra weight) and his performance in these first three of four races will determine whether he goes into nursery handicaps, or is good enough to tackle conditions racesÂ or even step into pattern races (high value, prestige races).

If, as we believe, he shows that he will be a 5f to 6f horse, then there are plenty of races available for him from May onward.Â  We will assessÂ this colt'sÂ progress and if Ollie believes he has the right level of ability heÂ mayÂ get entries for some of the more prestigious races in the racing calendar.

Your online Racehorse Manager will provide full details of all developments in terms of the colt's progress and race planning as the season progresses.

We expectÂ to get 2-5 runs and sometimesÂ moreÂ from allÂ our 2YO horses per share period, however, you should expect periods of no racing as a result of recuperation from injury or training setbacks.Â Â This share period starts proper at the start of the turf season on April 1st 2022 and runs through the turf seasonÂ untilÂ November 1st 2022, however we will be reporting on the colt before the share period starts (from January 2022) should we have anything of importance to share with shareholders.

During the seasonÂ the horse may be rested or have time away from the track to recover and it is quite normal for aÂ flat horseÂ to have periods ofÂ 3-6 weeks rest between races. 2YO's are particularly susceptible to sore shins, bone chipsÂ andÂ growing pains, and can need a greater time to recover between races.

We provide guarantees with all our racehorses. If this colt suffers a season-ending injury and has not alreadyÂ raced twiceÂ during the share period, we will replace him with an alternative horse for the remainder of the season. Replacement horses may not be of the same quality, are provided with no further guarantees and no alternative choice can be provided. Prizemoney cannot be paid on any replacements, but all other benefits such as yard visits and race day badges are available.

2YO's are the most risky of racehorses to own - and you should be aware that there is a chance that your 2YO may not race at all even though they do not get injured. Around 20% of 2YO's will not reach the racecourse during their 2YO season.

As a shareholder you mustÂ understand that we cannot guarantee your horses performance, a specific volume of runs (beyond our minimum guarantee) or that runs willÂ be evenly spaced throughout the share period. Â This is the chance you take when owningÂ any racehorse and participating in this ownership experience. Â If you will be disappointed with only 2-3 runs from your racehorse during the season, then please DO NOT PARTICIPATE IN THIS OR ANY OTHER RACEHORSE, as you could be disappointed. Â We believe in being crystal clear with our shareholders - any participation in racehorse ownership is a risk, andÂ we areÂ unable to make any refundsÂ because of share periods which finish early due to injury or retirement - as training and livery fees for the horse still remain whether they are racing or not and part of your lease payment covers the 4-5 month build-up to the season.