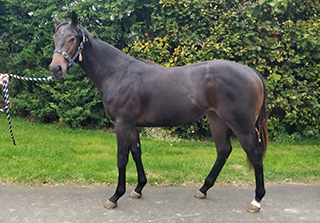 Only 1 share(s) equalling 0.2% is needed to qualify for prizemoney payments from Golden Gal 2021's racing season.

Gender: Filly
Birth Year: 2019
Colour/Markings: This filly is a deep chestnut, although she does have a lighter patch of bay on her nose. She has one white sock on her rear left leg.
Racing Post Form: View Race History
Racing Code: Flat
Expected to race in: North and Midlands

Galileo Gold is a first season sire and his first offspring (of which this filly is one) will race in 2021. This classic winning son of Paco Boy won the 2000 Guineas, Vintage Stakes and the St James' Palace Stakes.

Dubai Princess was Listed class, being placed twice in classy company. She also won several races at two and three. She has been a succesful broodmare with five winning offspring, including Windforpower who has won 17 times and Taquka who was rated in the upper 80's most of his career.

If you are looking for a deeper involvement with Golden Gal 2021, check out our list of Private Service shares. We may have leases or outright shares available in this racehorse from 4% and above.

Golden Gal is a daughter of 2,000 Guineas winner Galileo Gold, who will have his first batch of 2YO's running in 2021. Being by a Classic winning father and a Listed class mother, this youngster has every chance of being a very decent sort.

The mare, Dubai Princess, has been responsible for five winning offspring, including the ever-popular Windforpower, who has run almost 150 times and won 17 races and been placed over sixty times! She also has a son called Taquka who won significant prizemoney and was rated in the eighties.

Trainer Ollie Pears bought this filly at the Tattersalls sales in Newmarket in October. She is a medium-sized filly, and has a very good nature. Ollie describes her as 'Well put together and a great walker.'

Ollie Pears states, "Golden Gal caught my eye with the way she walked. She is a really nice mover, and has a great temperament. She comes from a successful family and has a lot going for her."

She is a relatively late filly, having been born in April, however, her breeding suggests she will need six furlongs as a starting distance, so she will have plenty of time to grow over the winter and start racing when the longer distance 2YO races start in May.

Ollie remarked, "Golden Gal may be on the small side at the moment, but that's because she's an April foal. She will grow tremendously over the next few months and it's the reason we were able to afford such a nice looking filly with black type in her pedigree."

When we asked over what trip we should expect to see this filly racing in 2021, Ollie replied, "Galileo Gold won as a 2YO over six and seven, and Dubai Princess won over five and six as a 2YO, so this filly is set to be a sprinter, at least in her first season."

Ollie went on to point out that with Galileo Gold being a first season sire, he is untried as a sire, however, with the mare having already been proven to have speedy offspring, it was well worth gambling a little on the sire.

"She is the sort of horse who could be anything. She's very correct and has a lot going for her. We'll have to see, but everything points to her being a really fun horse for the 2021 season." Ollie Pears, trainer.

Golden Gal will remain at Ollie Pears' yard in Malton through winter. She will get a rest through January to the end of February and start building up for the new 2021 season, ready to start racing in April 2021.

We will report on the Golden Gal's progress for shareholders on an ad-hoc basis, reporting on the major breakthroughs with her training before her new season starts - and we will provide regular updates on her progress on the gallops and with her education in detail from March onward. During the heart of the season we publish update reports every 7-10 days, and more regularly when she starts racing.

We expect between 3 and 7 runs from this filly in the 2021 season, and she will most likely race around the Yorkshire, Lancashire and North Eastern and possibly Scottish racetracks.

The race plans for this youngster will be determined by her level of ability shown at home and on the course in 2021.  On breeding she should start at five furlongs and then will perhaps get further, most likely just six furlongs, as she develops physically and mentally during the year.

If, as we believe, she shows that she will be a sprinter, then there are plenty of races available for her from late April onwards.  We will assess this filly's progress and if Ollie believes she has the right level of ability she may get entries for some of the more prestigious races in the racing calendar.

We expect to get 2-5 runs and sometimes more from all our 2YO horses per share period, however, you should expect periods of no racing as a result of recuperation from injury or training setbacks. This share period starts proper at the start of the turf season on April 1st 2021 and runs through the turf season until November 1st 2021, however we will be reporting on the filly before the share period starts (from January 2021) should we have anything of importance to share with shareholders.

During the season the horse may be rested or have time away from the track to recover and it is quite normal for a flat horse to have periods of 3-6 weeks rest between races. 2YO's are particularly susceptible to sore shins, bone chips and growing pains, and can need a greater time to recover between races.

We provide guarantees with all our racehorses. If this filly has a season-ending injury and has not already raced twice during the share period, we will replace her with an alternative horse for the remainder of the season. Replacement horses may not be of the same quality, are provided with no further guarantees and no alternative choice can be provided. Prizemoney cannot be paid on any replacements, but all other benefits such as yard visits and race day badges are available.

As a shareholder youmust understand that we cannot guarantee your horses performance, a specific volume of runs (beyond our minimum guarantee) or that runs will be evenly spaced throughout the share period.  This is the chance you take when owning any racehorse and participating in this ownership experience.  If you will be disappointed with only 2-3 runs from your racehorse during the season, then please DO NOT PARTICIPATE IN THIS OR ANY OTHER RACEHORSE.

We believe in being crystal clear with our shareholders - any participation in racehorse ownership is a risk, and we are unable to make any refunds because of share periods which finish early due to injury or retirement - as training and livery fees for the horse still remain whether they are racing or not and part of your lease payment covers the build up to the season.