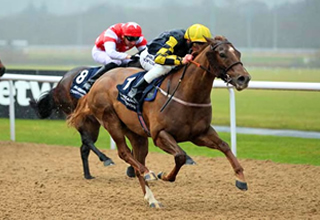 Only 1 share(s) equalling 0.25% is needed to qualify for prizemoney payments from Roaring Rory 2021 (AW)'s racing season.

Gender: Gelding
Birth Year: 2013
Colour/Markings: Rory have a wonderfully broad head and is a dazzling light bay. He has a small white circular marking on his forehead and one white sock - his back right.
Racing Post Form: View Race History
Racing Code: Flat - Handicapper
Expected to race in: North and Midlands

This gelding has a decent pedigree, being out of the top second season sire Sakhee's Secret, which was a multiple Group One winning sprinter at two and three years old.  His favoured distance was six furlongs and he won the Darley Cup and Cathedral stakes, earning over £500,000 in win and place prizemoney.  He has proved himself to be a decent sire with plenty of winners in his first two crops and was the top second season sire.  In the last few years his progeny have managed to be Group placed and provided Listed success.

Barbieri was a winner of a decent Maiden, and was rated 90 at the end of her two-year-old season.  She was retired to stud after her 3YO career and this early colt is her first offspring. Barbieri's three brothers and sisters were decent, indeed her half sister won in decent Maiden company and went on to be placed in Listed and Group races over sprint distances.

If you are looking for a deeper involvement with Roaring Rory 2021 (AW), check out our list of Private Service shares. We may have leases or outright shares available in this racehorse from 4% and above.

Roaring Rory was one of the first 2YO's we bid on at the Doncaster sales in 2014 and is a really delightful racehorse who has a set of loyal shareholders, some of which have been with him since his two-year-old season. He is a good looking son of Sakhee's Secret and Ollie Pears felt he walked well, and looked like a potentially very early type of sprinter - which is what he proved to be, being placed early in his career as a 2YO and then winning in August. He has won or been placed second in every one of his years racing to date. He is a compact and powerful sprinting type and he is by a sire (Sakhee's Secret) who's progeny tend to train on.

Being by a sire with proven sprinting abilities and out of a sprint-winning mare at two, Rory has proved he can win - winning six times and being placed a further fifteen times. He has a 40% strike rate of finishing in the first three places and a 16% win rate on the All-Weather surfaces. Like his parents, he is a sprinter and as a result, can race more often than many other horses. He has run between five and twelve times a season in the past.

Ollie says of the gelding "He's a good looking, wide faced gelding, and is a real delight to have around the yard. He isn't massive but he's a strong gelding and is one of the stars of the yard. He has continued to mature well every year we've had him. He has always walked well, and has no vices whatsoever. His pedigree is solid, and he comes from a family of winners, as he has proved himself."

Roaring Rory is always competitive, running in handicaps, and sometimes sellers where the chance of losing him is minimal - but the really important thing about this horse is that he is a real trier. He never gives up, and has won races when seemingly without a chance two furlongs out - but then stricks his head down and runs for the line when others around him are giving up. Ollie has clear plans for the gelding this winter - as he will make the most of the winter season on the All-Weather racecourses at Newcastle, Southwell, Wolverhampton and possibly Chelmsford and Kempton.

Ollie remarked "His 2020 season was cut short by Covid19. He ran a cracking race at Newcastle on his last outing, and we were looking forward to him winning next time out, but the shutdown stopped that happening. The reason I want Rory back in my yard my this winter is simple - he is talented, straightforward and is a real trier. He does sometimes miss the kick from the stalls, but as long as they go quick, that's not a massive drawback. He will put his head down and really try his best for his jockey, and that sort of attitude wins races. You really can't fault his personality, and in sprint handicaps on the All-Weather he will be competitive and should win his share of races."

Roaring Rory will be having the summer off, which should set him up perfectly for an All-Weather campaign at Wolverhampton, Southwell, and Newcastle. He has won and been placed at each of these tracks. He'll start back in August 2020 and may have his first race in October then will race through to the end of the winter season in April 2021. We expect to hold two stable visits to the Ollie Pears yard in Malton during this time, in Autumn and early Spring.

Roaring Rory also has a great temperament - although he will voice his displeasure by whinnying loudly on occasion - hence the first part of his name! However, he is quite trusting of people and is very inquisitive. He is a standing dish in Ollie's and is immediately loved by everyone who comes into contact with him! He is a great horse for a first-time owner and really gives great value for money.

The race plans for Roaring Rory are quite straightforward. The fact that this gelding acts well on the artificial surfaces means that he should provide his shareholders with plenty of racing, as he is robust and acts well on the All-Weather circuits.

As Rory is now eight, and will finish this season as a nine-year-old it may be his final season. As such, Ollie Pears is aiming to get the gelding into the winners enclosure and finish on a high. However, it's unlikely we will finish on a win - Ollie believes in racing again after a win! Ollie is looking to maintain Rory's great win record and we would be delighted if he can do so!

Because he is a sprinter and robust with it, he runs regularly, and assuming he remains fit and healthy throughout the seven months of the AW season we expect plenty of fun will be had with him. Your online Racehorse Manager will provide full details of all developments in terms of race planning as the season progresses.

We expect to get 2-5 runs and sometimes more from all our older horses per share period, however, you should expect periods of no racing as a result of recuperation from injury or training setbacks. This share period starts proper at the start of the winter All-Weather season in October 2020 and runs through the season until April 2020.

During the season the horse may be rested or have time away from the track to recover and it is quite normal for a flat horse to have periods of 3-6 weeks rest between races.

We provide guarantees with all our racehorses. If this horse has a season-ending injury and has not already raced twice during the share period, we will replace this horse with an alternative horse for the remainder of the season. Replacement horses may not be of the same quality, are provided with no further guarantees and no alternative choice can be provided. Prizemoney cannot be paid on any replacements, but all other benefits such as yard visits and race day badges are available.

As a shareholder youmust understand that we cannot guarantee your horse's performance, a specific volume of runs (beyond our minimum guarantee) or that runs will be evenly spaced throughout the share period.  This is the chance you take when owning any racehorse and participating in this ownership experience. If you will be disappointed with only 2-3 runs from your racehorse during the season, then please DO NOT PARTICIPATE IN THIS OR ANY OTHER RACEHORSE, as you could be disappointed.  We believe in being crystal clear with our shareholders - any participation in racehorse ownership is a risk, and we are unable to make any refunds because of share periods which finish early due to injury or retirement - as training and livery fees for the horse still remain whether they are racing or not and part of your lease payment may cover the build-up to the season.

This risk is the chance all shareholders take, as we do ourselves when participating in the ownership of a racehorse.